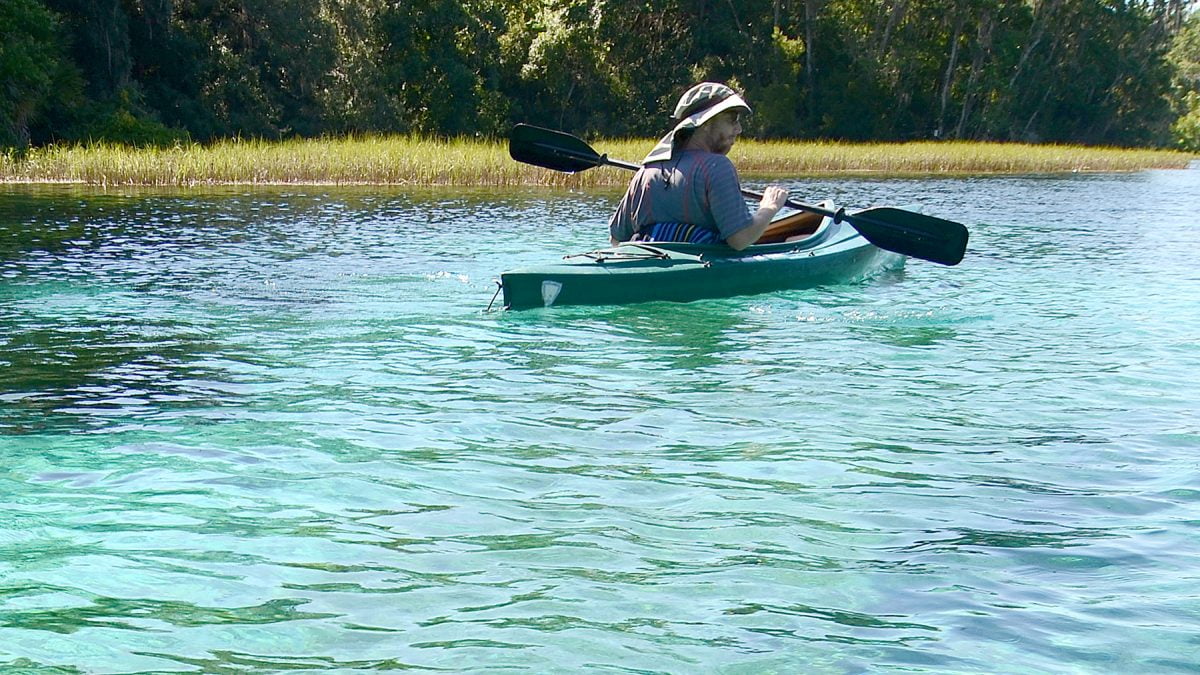 A kayaker enjoys the crystal clear water near the headsprings of the Rainbow River.

When you dip your toe into the Rainbow River, the water is always going to be the same temperature, 73 degrees. The constant temperature is just one of the many unique aspects of Rainbow Springs and the 5.6 mile long Rainbow River that is fed by the springs. 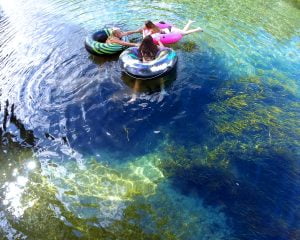 Tubing is a popular way to explore the Rainbow River.

462 million gallons of fresh water flow from four major spring vents and dozens of smaller vents, making this series of springs the fourth largest of Florida’s first magnitude springs. Bubbling sand “boils” can be observed at many of the springs sites.

The Rainbow River has been an important natural resource

for about 10,000 years. The Seminole Indians named the river Wekiwa Creek. Later the river was called the Blue Run. The landscape of the springs area changed with phosphate mining done in the early 1900s, during which time the towns of Dunnellon and Juliette, located on the property that is now the state park, prospered. In the 1930s, the name was changed to Rainbow Springs and the area opened as a privately owned tourist attraction.

Features on the attraction were the submarine boats, which were similar in appeal to the glass bottomed boats of Silver Springs, mermaids, waterfalls, a monorail, an aviary and a rodeo.

The U.S. Department of the Interior designated Rainbow River as a National Natural Landmark in 1972. It is also an aquatic preserve and an Outstanding Florida Water. By 1974, the Rainbow Springs attraction was shuttered, largely due to the opening of the interstate highway system in Florida and the opening of Walt Disney World in Orlando.

The State of Florida acquired Rainbow Springs to save it from developers in 1990. Volunteers formed Friends of Rainbow Springs and set about cleaning up the park. The State added staff in 1993, and the park was opened to the public full time in 1995.

The Rainbow River varies in clarity as your travel south from the head springs. The Florida Department of Environmental Protection and Southwest Florida Water Management District monitors the water quality on a regular basis. A visibility of 200 feet is often enjoyed by divers and swimmers.

Depending on whether you want to travel down the river in a tube, kayak, SUP or motor boat, either rented or your own, there are a few options and access points that for trips that vary in length, cost and physical difficulty. Motor boats are permitted on the river except at the head springs/state park area. The entire river is an idle speed-no wake zone.  There are other regulations on the river as well, so make sure you check before you go!

From your boat, tube, kayak or SUP, you will observe numerous species of birds including herons, anhinga, cormorants, ducks and the bald eagle; cooters, sliders and snapping turtles, fish of many varieties; and occasionally snakes, alligators and otters.

No matter what time of year, you can count on the Rainbow River to maintain its 73-degree temperature. The temperature of the Gulf of Mexico at Cedar Key ranges from 60°F in the cooler months to a tepid 86°F in the summer months, and the Atlantic Ocean at Daytona is virtually the same range, so the Rainbow is the perfect place to get cool in the summer months, and the perfect place to stay warm (in the water, anyway) in the winter.