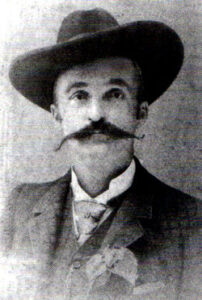 Albertus Vogt discovered phosphate in 1889 on his property. Over the next twenty years, the community “boomed” as people flocked to the area dreaming of getting rich.

Dunnellon was just a quiet little community when it was incorporated in 1887. The two rivers would have provided fresh water and plentiful fish for its residents.

That all changed in 1889 when Albertus Vogt discovered phosphate. Just like the California Gold Rush and other mining booms, the discovery of phosphate in Dunnellon, and it was some of the best phosphate in the world, caused a surge in population and activity in the area.

Suddenly, Dunnellon was no longer the quiet little community, especially during the few days after payday when the miners would hit the saloons.

Although the phosphate boom was over soon after the end of World War I, and Dunnellon’s last phosphate mine closed

The Mid Florida Antique Engine Club will once again be at Boomtown Days on April 9, 2022.

in 1966, signs of the past still exist throughout the community. A roadside marker shows the general location of the discovery of phosphate. Vogt’s home remains nearby and will hopefully be restored some day. The renovated train depot sits along the railroad tracks and boasts a museum full of treasures of the past. The remnants of phosphate mining exist in the Blue Cove neighborhood’s deep, water-filled pits. In the historic district, a few dozen structures dating back a century or more still stand, housing residents and businesses.

Every April, the City of Dunnellon gathers to celebrate its past with a festival, Boomtown Days, which attracts thousands of visitors. In 2022, the festivities kick-off with a dinner at the Greater Dunnellon Historical Society’s train depot on Tuesday, April 5. The festival will be on Saturday April 9, and feature pageants for kids of all ages, including the Queen of the Rainbow pageant, a good old fashioned pie eating contest, cowboy shootouts in the streets, music, a car show, antique engines and tractors, a kids zone, and plenty of food and craft vendors lining W. Pennsylvania Ave. and Cedar Street in downtown Dunnellon. 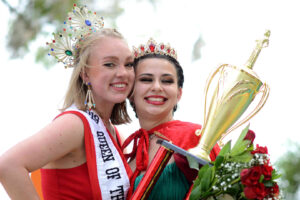 A Dunnellon tradition since 1952, the Queen of the Rainbow Pageant is one of several age divisions that will take place on the stage in the parking lot of H. Michael Evans, PA., which is one of the many well-cared for buildings in the Dunnellon historic district.

The event is hosted by the Dunnellon Chamber & Business Association and would not be possible without the support of dozens of sponsors and volunteers. To sponsor or volunteer for this or any other Chamber event, please contact the DCBA at 352-489-2320. 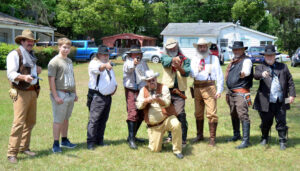 Kidd Carson’s Wild West Show offers entertainment reminiscent of the gunfights that broke out after phosphate miners spent their paychecks at Dunnellon’s saloons in the 1890s. 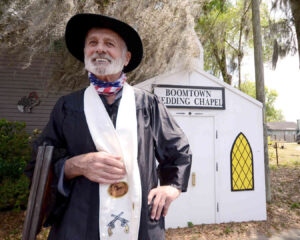 If you’ve been meaning to get married, stop by the Greater Dunnellon Historical Society booth over by Crazy Chicks for a shotgun wedding. While you’re there, stay for the 1 pm pie eating contest hosted by the Front Porch Restaurant & Pie Shop. The pie eating contest starts at 1. The winner get bragging rights and a $200 cash prize. 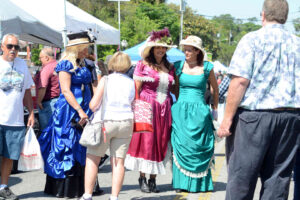 Boomtown Betty and “her girls” will greet visitors during Boomtown Days in historic downtown Dunnellon on April 9, 2022.