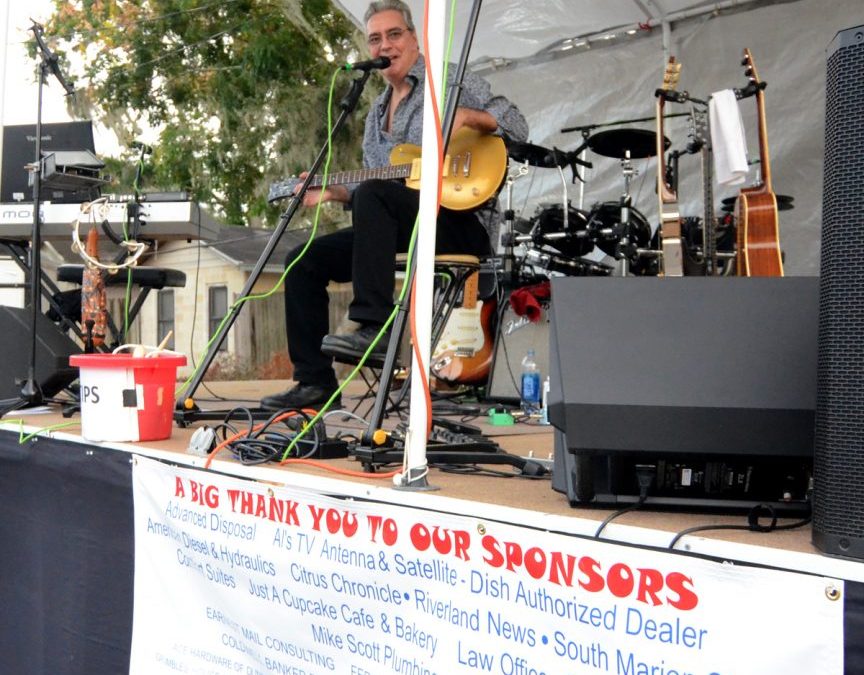 Put on your dancing shoes! Once again Dunnellon will be celebrating the best in music with its annual Jazz Up Dunnellon Music Festival on October 20 from 3 to 9 pm, located on both sides of Pennsylvania Avenue. The festivities are jam packed with 18 music acts of different genres playing at ten different locations throughout downtown. Visit local shops and stroll the streets of Dunnellon as you have a bite to eat from our food vendors and local restaurants, and whet your whistle at our beverage tents where beer and wine will be served. Some seating is available if you’d rather sit back and tap your toes, but bringing your own seating is also welcomed.

Our lineup of bands, going east to west: 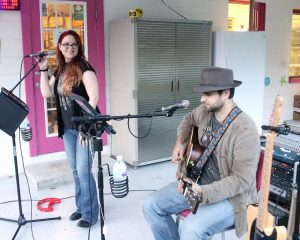 Just a Cupcake Café & Bakery sponsors and hosts the 2015 Rising Band Nashville Award winning band, Spechlis. Coming on at 5 pm, Sheyenne Rivers and Daniel Ericks of Spechlis say their music is a “delicate balance between Americana and pop with notes of folk, bluegrass and rock.”

At the Dunnellon Business Center, the Mudds Jazz & Blues Band will begin at 3 and feature guest musicians David Morgan & Matthew Horhota onstage until 9.

Sam Mudd and his wife Betsy hand-pick songs from 1940s and 1950s blues masters such as Eddie Boyd, Ollie Shepard, Smokey Hogg, Willie Dixon and ZZ Top. The Mudds will be joined by drummer David Morgan and Matthew Horhota on sax and clarinet. They are sponsored by Jay Easom and Jeffery Shivers, CPA. 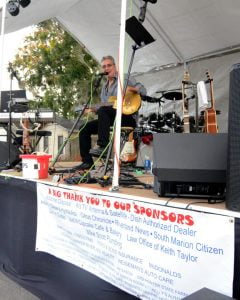 After playing solo last year, bluesman Keith Caton returns for Jazz Up Dunnellon with bandmate Gary Christensen on Oct. 20 at 3 pm in the west end of the Go For Donuts plaza. Jazz Up Dunnellon Music Festival will host 18 bands at ten locations on Oct. 20 from 3 to 9 pm.

Heading west, the next location will be the west end of the Go For Donuts plaza.

Sponsored by H. Michael Evans, PA, Caton has performed at Jazz Up many times. After performing solo last year, he will be playing with another member of his band Gary Christensen. They are two of four members of a band called the Bluesmen. They back up a great blues singer, Sheba the Mississippi Queen, and head to Memphis in January to compete in an international contest after winning the North Florida Blues Society’s Regional Blues Challenge.

Dunnellon-based Final Note, sponsored by Kelly’s Auto Repair Service, performs songs from as far back as the 1950s to the early 2000s as well as styles ranging from jazz, rock and blues.

In the Curt Bond Signs plaza, is Lisa Marie at 3 and Bad Kitty at 5. Lisa Marie is known locally for her involvement in St. John the Baptist Catholic Church’s music program. She plays rock, Christian rock and blues singer.  Bad Kitty plays “blues and oldies and everything in between.”

Starting out the talent on West Pennsylvania Avenue is Cutler Spur and Shadow Ridge at Penn Station.

Playing at 3 is Cutler Spur, a blend of old school country with southern rock flavor. Cutler Spur is sponsored by the Keith Taylor Law Group. Shadow Ridge, a country, rock and blues band from Spring Hill, takes over at 6:15.

The next venue on the west side of Pennsylvania Avenue, is Attorney Mike Evans’ building. Here event-goers can hear MoonDancer Cathy Dewitt at 3 and the Bob Cubbage Ensemble at 6:15.

Cathy Dewitt is an award-winning songwriter and performer from Gainesville. She has been compared vocally to Doris Day, Ella Fitzgerald and Diana Krall.

Performing for over 15 years, the Bob Cubbage Ensemble is comprised of lifetime musicians all of whom want to keep the Jazz Standards alive and well. They are sponsored by Gissy-Geotz Properties and Gissy’s Rainbow River Ranch.

At the Two Sisters are Buddy Shaw and Jon Semmes at 3 and the band Chrome at 6:15. 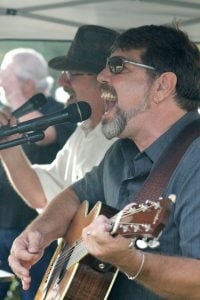 Local favorites Semmes and Shaw, play classic rock, blues and country. They are sponsored by Barry DeWitt with Keller Williams Cornerstone Realty and Al’s TV, Antenna & Satellite. Semmes is the talent behind Singing River Tours where he has spent many years sharing his knowledge of Florida’s ecology through story and song.

Down at the corner of Pennsylvania and Cedar by the Two Rivers Inn is the Smith Brothers Band followed by local favorite R-Style.

The Smith Brothers Band out of Ocala consists of two brothers who are retired educators, John and Bill Smith, and their friend Mike Cayse. They play standards, classic rock and roll, country, swing and Christian gospel.

R-Style, sponsored by Clear Choice Title, is a local band with a lot of loyal followers. One of their career highlights was opening for Molly Hatchet at the Brick City Beer and Wine Festival in Ocala. They play classic and southern rock and if you like what you hear, you can see them again. They frequently play at the Blue Gator.

And last but not least, rounding out the west side entertainment are Liz Pennock & Dr. Blues at 3pm at Cedar Street Boutique at The Grumbles House followed by the Community Swing Band at 6:15.

Sponsored by Grumbles House Antiques & Garden Shop, Cedar Street Boutique and the Historic Village Shops of Dunnellon is Liz Pennock & Dr. Blues are a blues and boogie woogie piano and guitar duo from St. Petersburg. They are no strangers to Jazz Up, having played here for 13 years.

The Community Swing Band from Citrus County is a large group of musicians of all ages who play big band, swing, jazz, blues and Latin jazz.