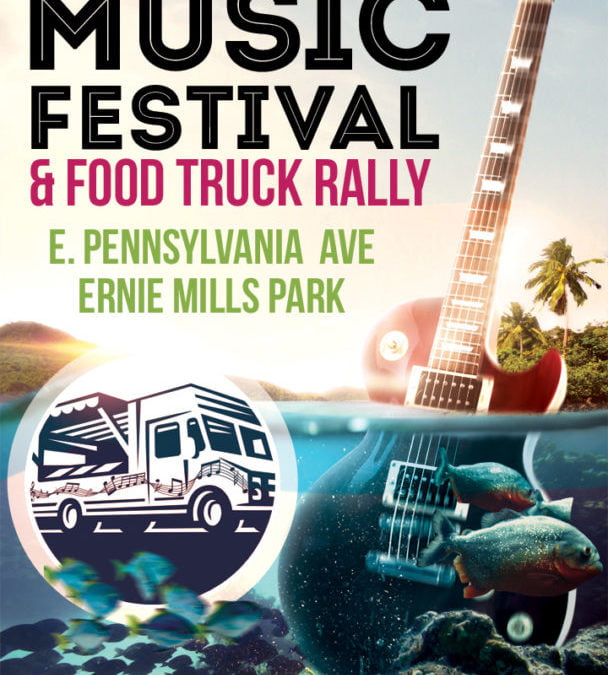 Bring your dancing shoes! (Or a chair if you prefer). We have the music, food, beer and wine. The name may have changed, but we are still going to rock the streets of Dunnellon with a dozen musical acts on NOVEMBER 16 from 5 to 10 pm at our Two Rivers Music Festival & Food Truck Rally. (Due to threat of wind and rain on October 19, we have moved the festival to NOVEMBER 16).

Why the name change you ask? Well, some people did not feel like “Jazz Up Dunnellon Music Festival” was a good fit for a music festival that did not feature only jazz. We also wanted to really promote the food aspect of the event, and this year at least ten food trucks will line up to serve delicious food of all kinds.

There are 12 musical acts up and down E. Pennsylvania, and we have a “meet the bands” graphic prepared (below) so you can visit the ones who have your favorite music genres.

Here’s a little bit about some of the artists:

Presley Lawson will play at the Chamber from 7:15-9:15. At the age of 12 Presley’s musical journey began with her first spotlight performance singing the National Anthem for the Houston Astros.
Presley has her own unique style and vocals, melding the pop and country genre blending them into her own sound. Presley is sponsored by Kustom Glass, LLC.

At Ernie Mills Park Nino Castaneda will play from 5-7:30. Nino is a Latin jazz guitarist who loves performing locally. Nino has played at our music festival before and we are glad to have him back! He recently played in the Levitt AMP Music Series in Ocala. Nino is sponsored by Kimley-Horn.
Following Nino at Ernie Mills Park is Donald J & Company from 7:30-10. Stop here to listen to some pop/top 40 hits. They are sponsored by Mike Scott Plumbing.

In the Go-for-Donuts Plaza West, the Keith Caton Blues Band plays 5-7:30, sponsored by H. Michael Evans, PA and Rainbow springs Realty Group. A lifelong bluesman, Caton has played with the likes of Bo Diddley during his career. Caton was part of a band that was a finalist in the International Blues Challenge hosted annually in Memphis, Tenn. in January 2019. 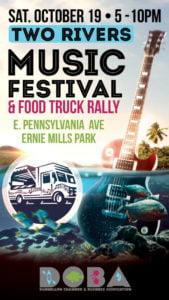 We look forward to seeing you at our Two Rivers Music Festival & Food Truck Rally on October 19 from 5-10 pm.

After Keith, Final Note, sponsored by Kelly’s Auto Repair & Service, plays from 7:30-10. Dunnellon-based Final Note performs songs from as far back as the 1950s to the early 2000s as well as styles ranging from jazz, rock and blues. They are a local favorite comprised of members of the Michel family, who by day run Kelly’s Auto Repair Service on Highway 488. The six member band, which plays music from the 50s to today, has been playing together for about 14 years. https://www.facebook.com/finalnoteband/

Semmes & Shaw, sponsored by Singing River Tours and Al’s TV, Antenna & Satellite play at Badcock & More Home Furnishings from 5-7:30. Local favorites Semmes and Shaw play classic rock, blues and country. Semmes is the talent behind Singing River Tours where he has spent many years sharing his knowledge of Florida’s ecology through story and song.
They are followed by Chrome, sponsored by Fero & Sons Insurance, who play from 7:30-10. The trio Chrome is a variety band from Williston, playing country, classic rock, blues and southern rock.

At Dunnellon Chiropractic, Cami Maree plays from 5-6 (solo), and 6:30-9 with her band. Her energetic style is a unique blend of the bluesy-soul of Adele, an alternative rock flare reminiscent 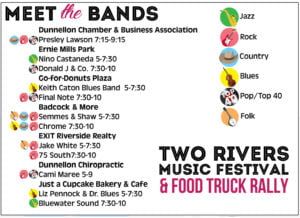 We will publish a map prior to the event on Facebook and we will have the printed map available at different locations before and during the event, but this graphic shows the music schedule and genre of each act.

of The Cranberries, the edginess of Pink, and the rock rasp of Janis Joplin. Cami is sponsored by the Insurance Centre of Dunnellon.

Just a Cupcake Bakery & Café hosts Liz Pennock & Dr. Blues, sponsored by Local Ad Face, from 5- 7:30. Liz Pennock & Dr. Blues are a blues and boogie woogie piano and guitar duo from St. Petersburg. They just returned from being on tour. They are no strangers to our fall music festival, having played here for over 12 years. Blue Water Sound, sponsored by Coldwell Banker Riverland Realty, follows from 7:30-10 with smooth jazz, funk and blues.

We hope you will join us on October 19! For more information, please call the Dunnellon Chamber & Business Association at 352-489-2320.